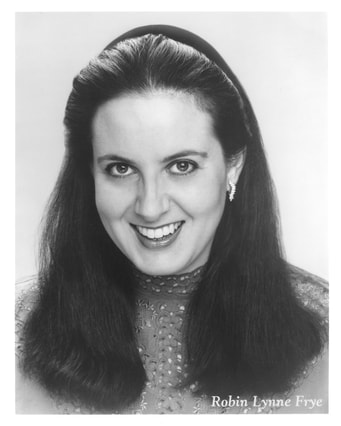 Mezzo-soprano Robin Lynne Frye, a concert repertoire specialist, has received widespread critical acclaim for being “vocally and musically. . . a most impressive singer” in her performances in oratorio, chamber music, recital and opera. With a voice described as “world class,” “fresh” and “graceful,” she has been especially noted for her “outstanding velvety vocal quality, breath control, and presence,” “richness of tone,” “real vocal sheen and charm,” “fine dramatic sense,” “deep feeling and style,” “great humor” and “cultivated diction.”

Ms. Frye has appeared as soloist in all of New York’s major concert halls and with such ensembles as the New York Philharmonic, the Connecticut Early Music Festival, the choir and orchestra of St. Ignatius Loyola and the New York Virtuoso Singers, as well as in recital in several states. In North Carolina, she has also appeared with the North Carolina Master Chorale at Meymandi Hall, with the Choral Society of Durham at Duke Chapel and with the Cumberland Oratorio Singers. She has won or placed in several competitions, has performed in many premieres, has had a number of works composed for her voice and may be heard on numerous recordings. She was one of the “exceptionally talented emerging classical artists” on the roster of Astral Artistic Services. Ms. Frye is a frequent duo-recitalist performing with baritone Robert Mobsby as “Music Made for Two,” with recent performances at The Church of St. Mary the Virgin in New York and at the First Presbyterian Church in Greenwich, Connecticut. Their next duo-recital will be as part of a concert series at Emmanuel Episcopal Church in Southern Pines, North Carolina, on January 28, 2022.

Following a 20-year Manhattan-based performing career, Ms. Frye moved to North Carolina in 2002. While there, she was a member of the music faculties at the University of North Carolina at Pembroke, Methodist University and St. Andrews University, teaching individual and class voice, opera workshop, French, German and Italian lyric diction, basic theory and sight singing. She was a writer and editor of the materials prepared for UNC-Pembroke’s successful reaccreditation review by the National Association of Schools of Music. In addition to running her busy private voice and piano teaching studio, she was Executive/Artistic Director of the Moore County Music Society, a member of the Music Committee and Chair of the Young Musicians’ Festival of the Weymouth Center for the Arts and Humanities, and the Director of Children’s Music at Brownson Memorial Presbyterian Church in Southern Pines.

Ms. Frye holds the degrees of Master of Arts in Music Education from UNC-Pembroke and Bachelor of Music from Syracuse University, the latter with a major in voice performance and a minor in piano performance. She presented her research on “Considerations in Song Recital Programming” at the Annual Voice Educators’ Symposium presented by Indiana University's chapter of the National Association of Teachers of Singing. She completed the Professional Development Program co-sponsored by The New York Singing Teachers’ Association and Westminster Choir College, with courses in Singer’s Anatomy and Physiology, Vocal Health, Voice Acoustics and Resonance, Singer’s Repertoire from a Developmental Perspective and Comparative Voice Pedagogy. She has studied the analysis of the singing voice with Donald G. Miller, developer of the VoceVista program which allows interpretation of real-time spectrum analysis and electroglottograph signals. Ms. Frye is a longstanding voice student of David L. Jones of New York City.

Recognized by the New York Singing Teachers’ Association as a Distinguished Voice Professional, Ms. Frye has served as a choral clinician and as a competition adjudicator for organizations such as the National Association of Teachers of Singing, the Music Teachers’ National Association and the American Choral Directors’ Association. Ms. Frye moved back to New York in 2007 and continued her performing and teaching career. In 2021, she made a permanent move to Pinehurst, North Carolina. She maintains an active voice and piano teaching studio in Pinehurst and continues to perform frequently as a soloist. Her students have found success as professional performers, in competitions and in leading roles in concert, opera and musical theater.

Ms. Frye was recently appointed Director of Music at Community Congregational Church in Southern Pines, conducting the adult choir and serving as organist and pianist. She is an organ student of Dr. Homer A. Ferguson III.